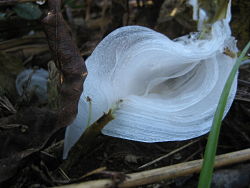 My brother-in-law knows what a hibernating bear I become in the winter at our cabin in western Alabama. Even when it’s sunny, if the temperature is less than 50 degrees, I tend to stick by the fireside. I thought he was using extreme imaginative measures enticing me outdoors with claims of seeing “ice flowers”. I had never heard of them before, and it took some coaxing on his part to convince me to check out his assertions. I bundled up with my jacket, hat, and gloves before venturing out for a walk down the dirt road to see this phenomenon, called “ice flowers”. But here they are- check out the photos.

When I got home I did a google search, and found several articles about them. Some people call them ice flowers, others call them ice ribbons- I guess it depends on the formation. The first picture posted looks like an ice flower, but here’s one that looks more like a ribbon tied in a bow. See the second photo. You might call this one  an ice angel because it looks like it has wings.

D. Bruce Means wrote in February 2004 in “Natural History” about his findings :

“On close inspection, I saw that the “petals” of my ice flowers push their way through the vascular bundles of the dead stems: Water from the roots is drawn up the stems (either as part of the plant’s natural transportation system or through capillary action) and expands as it freezes, breaking the stem walls and creating a flow of ice. The leading edge of the ice freezes to the stem’s papery bark, and as the ice grows it is lifted upward by the attached bark, forming delicately curved, lacy ribbons…
Ice flowers “grown” by the same plants during later freezes in the same winter take on entirely different shapes, often becoming more compact, like true flowers. The bark of the woody stems has already been peeled upward by the first freeze, and so it is no longer available to shape the growth of new ice flowers.” 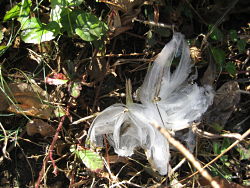 So there you have it! Winter does have something to offer besides a chance to roast chestnuts on an open fire. Button up your over coat and go ice flower hunting! It’s a joy to come upon these flowers because they only “bloom” in certain weather and temperature conditions. You may be privileged to see them one year, and then go several years with no sightings.

Let me hear about your ice flower sitings.